Of all the depressing developments in otherwise lovely Lucca this summer, the one that tops the list is the opening of yet another gelateria . . . less than a hundred yards from our house! This new gelateria, la bottega del gelato, is head and shoulders above all the other ice cream parlors in town . . . and, unfortunately, it is less than the length of a football field from where we live! Barbara is seriously worried about my welfare. At first it seemed like such a great thing, but quickly she realized the potential downside. On a normal day I probably walk past the gelateria at least ten times. The sobering reality is, in a pinch, I can be there in less than three minutes, in less than two if I don’t wait to take the elevator down to the ground floor in our building.

Being a fairly friendly and neighborly sort, I was among the first to enter the new establishment and patronize it. At first it seemed like something heaven sent, like a mirage in the desert . . . and so tantalizingly close to the house! When I first spotted this establishment, I decided to find out what it was like after it opened later the same day. As I normally do, I applied the “Seaver” rule for judging ice cream, namely, if the ice cream is not piled up in huge rounded mountains of glop, chances are better than average that the ice cream is good. I am sad to report that the ice cream was not good; instead it was great! Quite frankly, I was completely bowled over by the exceptional quality of the product on offer. What an unmitigated disaster for me personally! 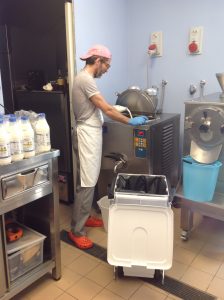 In a town with one of the highest concentrations of gelaterias in the world, it was quite a surprise to find yet another entrepreneur trying to crack what appeared to be a completely saturated market. However, once I discovered that the gelataio hailed from Bergamo and that he had done his apprenticeship in Torino, the undisputed ice cream mecca of Italy, my interest was genuinely piqued. Unfortunately I was keenly aware that I had only consumed 3 calories in making my way from our house to this den of iniquity. It was clear that I was not in fighting shape. It was now after six in the evening, less than two hours until dinner time.

What a dilemma! Nevertheless, I was on a mission. What could I do? My heartbeat quickened when I noted all the gleaming covered canisters with signs indicating a vast array of sophisticated flavors such as sweet and salty pistachio ice cream (made with pistachios from the town of Bronte in Sicily), hazelnut and roasted hazelnut ice cream made with the best hazelnuts from Langhe in the Piedmont. I used up more energy reading the labels than I had traipsing the 115 steps from our home to this maledetta bottega. Barbara was right to be concerned. Once again Roberto had been blinded by bright shiny things! Tommaso, the master gelataio, immediately identified me as an easy mark and began plying me with teasers.

First, it was normal stuff like vanilla ice cream made with the best vanilla beans from Madagascar. Then I was offered hazelnut, both the regular and roasted versions. From there the degustazione continued on to both types of pistachio ice cream. The descent from there was rapid and I lost all track of time. Tomasso tricked me into trying both types of zabaione ice cream. The difference was subtle, but, after trying them both a second time, I decided that I preferred the classic zabaione made with sweet Marsala wine from Sicily rather than the rarer variant of zabaione made with sweet Moscato wine from the north of Italy. The truth, of course, is that they were both very good. The proof was in the pudding, as the saying goes.

As the hours passed by we moved on to more exotic flavor combinations such as dark Mexican chocolate with peperoncino infused with wild mint and served with pieces of bitter orange rind. While it was an interesting flavor, I preferred the dark chocolate infused with espresso and served with rum soaked cherries. Being a purist in such things, I reluctantly refused the homemade cialda that Tommaso offered with each tasting. Barbara would have been proud that I had said no to something!

By now it was approaching nine o’clock and the bottega del gelato was about to close at the end of their first official day of business. I felt privileged to have been on the ground floor, so to speak. In a rash display of unwarranted faith, Tommaso asked me if I would become their official taste tester. Knowing that this would be yet another step down the slippery slope, after a momentary pause, I agreed that it was an offer I could not refuse.

On the long walk home I reflected on my incredibly bad luck to have stumbled on to what was clearly now the best gelateria in town. Four minutes later I was sitting down to dinner, drowning my sorrows in a glass of Chianti.

I scream, you scream, we all scream for ice cream!